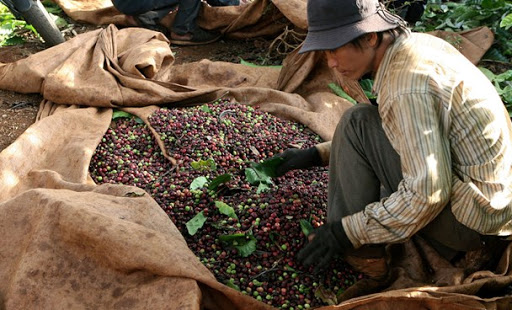 Meanwhile, data released by local trade office earlier this week showed that in February, Lampung province exported 2,675 tonnes of robusta beans, down 83% from a year earlier.

May robusta coffee had shed 2.5%, or $37 over the past week as of Wednesday’s close after having reached its one-year peak.

“Farmers are holding onto beans as prices are too low. They don’t want to sell,” a Ho Chi Minh-based trader said.

“The market is less bustle as both sellers and buyers want to wait and see.”

Traders in Vietnam offered 5% black and broken grade 2 robusta at premiums of $40-$50 to the May contract, down from $60 premium last week.

Vietnam’s coffee exports in the first two months of the year likely fell 18.5% from a year earlier to 271,000 tonnes, while export revenue in the period was expected to decrease 15.8% to $473 million, official data showed.

Meanwhile, data released by local trade office earlier this week showed that in February, Lampung province exported 2,675 tonnes of robusta beans, down 83% from a year earlier.

Traders in Indonesia’s Lampung province said they were offering robusta beans with premiums of $220-$230 to the April contract and $200 to the May contract, unchanged from last week, as trade remain limited due to lack of new beans.

Farmers in West Lampung area are expecting a mini harvest in March as weather conditions were conducive for the crop, while the main harvest was expected to fall around June or July, a trader said.