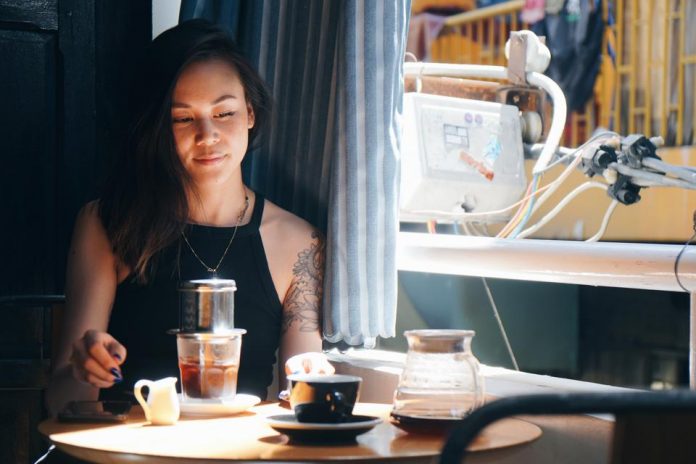 Nguyen Coffee Supply’s Sahra Nguyen, the first-ever Vietnamese-American importer, roaster, and supplier of beans from Vietnam, takes us on a caffeinated journey through the remarkable coffee scene of Vietnam.

Coffee from Vietnam has been sold in the United States for a long time, but ask any connoisseur and they will probably be unable to tell you where to find it, despite the fact that Vietnam is the second largest producer of coffee beans in the world after Brazil. So in the third wave movement of coffee, which prioritizes transparency from bean to cup, why does no one know that this is the source of so much of America’s coffee?

This is the question that drove Sahra Nguyen, founder of Nguyen Coffee Supply, to research where all these beans were ending up. “It does get imported here, but not as a fresh coffee bean,” Nguyen discovered. Instead, Vietnamese beans end up as supermarket coffee and instant coffee, “so once it starts hitting the shelves, no one knows it’s Vietnamese coffee.”

Being channeled through the commercial grade coffee market segment is what has prevented Vietnamese coffee beans from being elevated alongside so many other countries’ beans during the recent coffee revolution. Lower value products like instant coffee or ground coffee might sit on the shelves for years, falsely characterizing Vietnamese coffee beans as having an inferior flavor. “These beans have been trapped in this cycle of poverty where they can’t elevate or advance their production,” Nguyen explains.

And the fact that these beans have been used for cheaper products fuels a false narrative that this is all they’re good for, when in fact it has more to do with the fact that Vietnam has been supplying coffee beans well before consumers cared as much about flavor and the quality of life for workers than they do today, meaning there was no new market opportunity as artisan coffee has grown in popularity because Vietnamese beans were already dedicated to the commercial grade market.

Despite facing resistance in the coffee industry from those buying into the inferior bean narrative without looking deeper as to why that characterization exists at all, Nguyen knew there was something good behind it all—and Nguyen Coffee Supply is changing the game by currently sourcing single-origin green coffee beans from Da Lat and fresh-roasting in Brooklyn. “I know it because the U.S. has been buying them,” she says, adding that another blindspot in the Vietnamese coffee bean story is the assumption that there’s no coffee culture at the source.

Like most places that produce coffee, coffee is a mainstay of the local diet in Vietnam, and a coffee culture exists despite its lack of visibility on the international stage. “Vietnamese coffee is centered around the robusta, with a bolder flavor, darker nutty flavors,” Nguyen explains, sharing that Vietnam is the number one producer of robusta beans in the world (with arabica on the rise). But it’s the diversity of coffee culture that appeals so much to Nguyen, “whether it’s having coffee on the street with stools on the sidewalk, or specialty coffee cafes with roasters in the shop,” noting that the hierarchy seen in American coffee culture doesn’t exist in Vietnam.

Coffee lovers should take the time to explore what Vietnamese coffee has to offer, and nowhere is better to do so than at the source. Nguyen shares her suggestions for those seeking a diverse exploration of coffee culture in Vietnam, from specialty coffee shops to traditional holes in the wall around the country.

The Workshop is one of Saigon’s leading craft and specialty coffee destinations, considered the top three as far as reputation and quality and a pioneer in the industry. It can be a little tricky to find, as it’s upstairs in a nondescript building, but once inside it feels like you’ve stumbled onto a local gem. “This is one of the few places that creates blends using Vietnamese beans with non-Vietnamese beans, including Ethiopian arabica beans,” Nguyen says, speaking to their wide range of coffee beans for guests to sample. Nguyen suggests trying Catimor, an interesting variety that undergoes a washed process in the highlands of Da Lat.

Bosgaurus Coffee roasts in-house 5 days a week. It stands out for its use of arabica, a less common bean in Vietnam. They’re also home to the winner of the Vietnam National Barista Championship. From a design standpoint, the cafe is stunning, inspired by a laboratory. Nguyen describes how the “baristas stand behind a 9.6 meter-long bar suspended from the ceiling,” surrounded by entirely glass walls. The menu spotlights the quality and versatility of Vietnamese arabica beans, the up-and-coming variety behind robusta.

“Sourcing from seed to cup, Bosgaurus promotes arabica sua da—a very interesting take on Vietnamese coffee (ca phe sua da), which is almost always made with robusta. They tend to roast lighter to showcase the coffee’s complexity while also allowing regional differences to shine through.” Nguyen suggests trying the “Arabica Sua Da”, which is arabica coffee and condensed milk.

La Viet is a straightforward name essentially sending the message that “this too, is Vietnamese coffee,” appropriate considering they’re one of the early pioneers of specialty coffee in Vietnam. Preparations such as pour overs and espresso are newer to the country, and by bringing this onto the scene La Viet changed the notion that Vietnamese coffee could only be something sold in plastic cups on street corners. “Like Bosgaurus, they spotlight arabica beans and aim to change the narrative to include those beans in what we traditionally consider to be Vietnamese coffee.” Check out the Bloody Cold Brew (which is spicy) and the Cold Brew Margarita for an adventurous treat.

G20 Cafe is one of the most popular cafes in Buon Me Thuot, which is a renowned coffee producing area. “It’s beautiful with an entrance lined with cherry blossom trees,” Nguyen muses, adding that besides being one of the most Instagram-friendly cafes in Buon MeTuot, the cafe showcases the long traditions of coffee production in the region. It’s worth noting that they also offer a limited amount of civet and elephant coffee produced nearby, which isn’t always an ethical production method. These coffees are digested by elephants and civets, then extracted from their waste. “This is said to imbue the coffee with great flavor and textural properties,” Nguyen describes of the resulting coffee variety.

The World of Coffee Museum

Less of a cafe and more of an essential stop for coffee lovers touring Vietnam, the recently-opened World of Coffee Museum is built in the style of the long houses used by many of the ethnic minority populations who have traditionally farmed the land and grown the coffee of the region. “Vietnam is actually incredibly diverse with 54 distinct ethnic groups that have their own customs, languages, and attire,” Nguyen explains.

In addition to getting coffee, visitors can learn more about the long history of coffee production in Vietnam, which was first introduced in colonial time by the French. “Vietnamese coffee is unique not just for its quality and range, but for the interesting historical circumstances through which it came to be” Nguyen says. At the World of Coffee Museum many artifacts from all around the world in the early, pre-electricity days of coffee production, brewing, and consumption can be found.

Generally, the specialty coffee scene has not quite reached Nha Trang, but because it’s a booming destination for tourists, this is a place to watch for craft coffee culture.

“This cafe is popular among locals, which makes it unique” Nguyen says. The design is fantastic, constructed entirely of wood with pictures of Vietnamese jungles and greenery to create the sensation of being inside a tropical tree house. It showcases the versatility of Vietnamese coffee—not just for traditional ca phe sua da but also espresso and creative slushes. At An Cafe, the owners import beans from a farm in Da Lat and grind the coffee fresh on site.

Specialty coffee took off first in Saigon, but Hanoi, Vietnam’s capital, is a close second. Like some of the others mentioned on this list (and like Nguyen’s business, Nguyen Coffee Supply), Atelier is promoting “fine robusta” as a way to communicate that robusta can be just as good as arabica in specialty applications, Their signature drink, the hatsukoi, incorporates espresso with steamed milk, salt, pepper, and cinnamon. They also serve a shakerato and a pandan coffee in the summer. “Here, we see the creativity and willingness to experiment of young upcoming baristas in Vietnam,” Nguyen says. This is a chic cafe with clean, modern, and minimal design.

While it does carry specialty coffee, Blackbird is more of a relaxed hangout spot for newcomers and coffee experts alike. “Located in the Old Quarter, it’s a convenient stop if you don’t want to go too far out of the way to try some great Vietnamese coffee,” Nguyen advises. Both arabica and robusta are offered here, and the cafe is a modern, progressive establishment that showcases many sides of Vietnamese coffee, focusing specifically on coffee sourced from within the country.

Cafe Dinh is “a little piece of history frozen in time,” according to Nguyen. Like a well-preserved time capsule, this cafe captures what coffee shops looked like during Vietnam’s tough times in the 1990s. “Before we speak about specialty coffee, we must recognize and pay homage to the longstanding establishments that pioneered the way we drink coffee today,” Nguyen says. Hanoi’s famed egg coffee, featuring a whipped/stirred yolk, is a specialty here. This is one of Hanoi’s oldest cafes, accessible only through a narrow hallway and tight staircase. Inside, the vibe is old and traditional, with tiny stools and tables, people smoking cigarettes. Nguyen suggests trying to snag the coveted balcony spot. This is not a specialty cafe, as they’re using ground coffee, but it’s delicious and as “classic” as it can get in Vietnam.