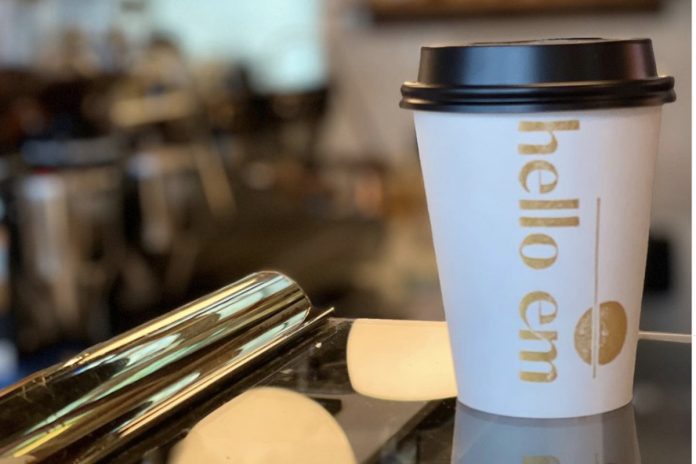 YENVY PHAM pulled her first shot of espresso just a few months ago, but she’s already mastered the barista art of cheerful competence and sensible black attire. She leans across a gleaming white counter to present a classic ca phe sua da, iced coffee with condensed milk. “Vietnamese coffee will hit you in your effing face,” she says. “It’s punchy and mouth-coating—like MSG!”

Pham’s fairly familiar with MSG. She has its chemical compound tattooed on her arm and presents its finer points nightly at her family’s restaurant, Pho Bac, just a few blocks away in the heart of Little Saigon. As second-generation stewards, she and her siblings preserved Pho Bac’s origin story—namely the modest boat-shaped building considered Seattle’s first pho shop—even as it evolved into a larger, handsome restaurant across the parking lot. Pham wants to strike that same balance for Vietnamese coffee.

In January, she and her business partner, Nghia Bui, opened Hello Em, a roastery and coffee shop inside Little Saigon Creative, the first gathering space of this sort in Seattle’s historically Vietnamese district. It joins a handful of other new Vietnamese coffee shops, including tradition-minded Phin a few blocks away and Coffeeholic House in Columbia City, with its iced coffee topped with salty fluff known as cheese foam. Their approaches vary, but each one adds welcome dimension to America’s original coffee scene.

That dimension’s overdue, considering Vietnam is the world’s second-largest exporter of coffee. Its coffee traditions famously center on condensed milk, but the beans matter too; Vietnam grows the forceful robusta variety. A good ca phe sua is sweet enough for latte enthusiasts, strong enough to lure coffee die-hards who scorn pumpkin spice. The beans that leave Vietnam are almost entirely commodity-grade, the stuff of instant brew or filler in cheaper blends. Robusta commands roughly half the price and packs twice the caffeine of more prevalent Arabica beans.

Bui, Pham’s business partner, tapped family ties to Vietnamese coffee farms to source small batches of high-quality robusta coffee cherries. Conor Mahoney of tiny Dorthea Coffee schooled Pham on roasting and helped the duo procure the tiny electric roaster that sits near the counter at Hello Em. It resembles one of those kiosks that will smoosh your penny into a decorative pattern. Pham and Bui use it to make a single-origin robusta—a carefully crafted, small-batch punch in your effing face, designed to carry the weight of condensed milk. A Synesso espresso machine gleams gold against Hello Em’s black and white decor.

Order a ca phe trung and Pham will pull a shot, spoon some pudding-like egg creme on top, and share the legend of the Hanoi cafe that devised this whip of condensed milk, yolk, and salt during lean wartime years. She also used leftover whites to create “egg cloud,” a lighter foam that lends coffee a sweet-salty balance, like chocolate-covered pretzels with a kick. “My mom would slap me if she knew I discarded the egg whites from making egg creme.”

Pho Bac’s evolution demonstrated Pham’s particular talent: seeing her culture from multiple angles. In building Hello Em, she happened to obtain a panini press and a hot dog roller, two key developments in a food menu of “banh mi–nis,” pressed sandwiches that transform a banh mi baguette into something minimalist. And while she had her first coffee at age five (“I downed it!”), she’s in this for something bigger. As Little Saigon charts its transition from no-nonsense business district to a place with actual residents, she figured its first coworking space could use a proper Vietnamese coffee shop. A place to give robusta the boutique treatment it merits in Vietnam, and to attract new patrons in a city that recognizes caffeine as an art form.

That would be the phin, a device ubiquitous in households and cafes across Vietnam. Its slow and careful drip—like a French press crossbred with pour over—means your first sip might be five minutes away. Before Phin opened last October, its owner had zero background in coffee or food. Like Hello Em, his shop is more about the neighborhood’s legacy than a jones for good caffeine.

There’s a gap,” says Phin coffee shop owner Bao Nguyen. “We want to continue the cultural identity of this area, but who’s going to do it?

Nguyen was 10 when his family arrived in Seattle on a Greyhound bus. For them, Little Saigon was “a genuine lifeline.” In college, he studied chemistry, but ended up as a community organizer in Chinatown–International District. Activist legend Bob Santos’s fight against a proposed McDonald’s underscored how easily chains could corrode the neighborhood’s historic texture. He saw longtime shopkeepers retire, saw their kids pursue different career choices. “There’s a gap,” says Nguyen. “We want to continue the cultural identity of this area, but who’s going to do it?”

To him, opening a business in Chinatown–International District seemed the best way to advocate for the neighborhood. He credits a business across the country (with a familiar surname) for pointing him toward a cafe. Brooklyn’s Nguyen Coffee Supply imports and roasts organic beans from Vietnam. Suddenly American shops can access specialty robusta blends. Otherwise, says Nguyen, “I would have maybe done something else.”

Anyone who aims Vietnamese coffee at a mainstream audience (or a Northwest climate) must decide how to bridge certain differences from how many Americans experience coffee. Iced coffee rules in steamy Saigon (at Coffeeholic in Columbia City, the ice maker is more prominent than the espresso machine). Seattle has more cause for drinks that warm you up. A sign at Phin assures visitors, “Hot Vietnamese coffee available!” Nguyen’s most significant display of activism might be his commitment to the phin; there’s no other way to brew coffee here.

Unlike a paper filter, the holes in a phin let natural oils through, delivering a richer coffee. Nguyen makes his own, not-too-sweet condensed milk in-house (an unexpected outcome of that chemistry degree). He also makes a thick, condensed milk yogurt, which gets a pour of coffee to become sua chua ca phe. Anyone unfamiliar might require two or three sips to decide that you do, in fact, love coffee and yogurt. When Nguyen opened this place, he decided to embrace high-tech grinders and kettles, but avoid anything  trendy or drizzled with novelty syrups. “We’re going to make old things that people love.”

So how to explain the pandan waffles? A neon green batter yields waffles chewy like a gummi bear and as Instagrammable as any multicolor coffee drink. Nguyen remembers going to temple for holiday celebrations; he would visit one food stall, where a lady channeled the classic combo of pandan and coconut into the western notion of a waffle.

“My ancestors already came up with that.” He’s just the guy who brought in commercial-grade irons to make those waffles perfectly golden and extra crisp.”