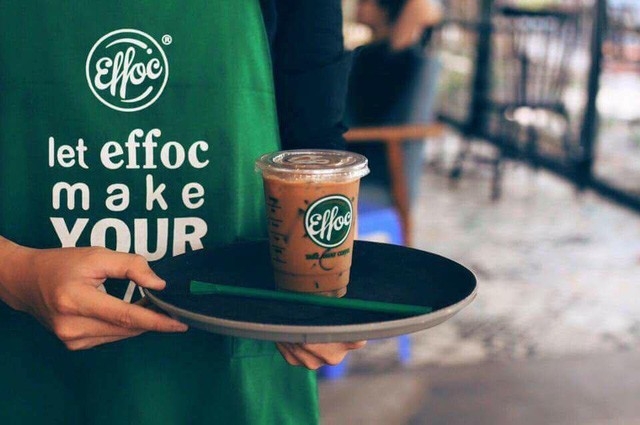 Franchising is the fastest way to help brands, including café chains, to increase coverage. In Vietnam, numerous café chains reported soaring outlet numbers thanks to this model, including Highlands Coffee, Cong Caphe, and E-coffee.

Launched 20 years ago, Highlands Coffee is one of the most successful names in the local coffee and franchising scenes. Highlands Coffee established its brand at the high-end segment, thus charges a franchise fee much higher than the average competition, with stricter rules to comply with.

The monthly franchise fee is 7 per cent of the monthly profit.

The management fee is 5 per cent of the monthly profit.

The theme and ambience of Cong Caphe outlets bring to mind Vietnam’s subsidy period. Cong’s name is synonymous with a retro experience in today’s busy world. Every Cong Caphe in the city boasts a different design without derailing from the military-green colour that has helped elevate its brand to stand on par with Starbucks among Hanoi’s youth. Almost always an instant success wherever they open, the chain has a broad loyal clientele and covers a large area of Hanoi.

At present, the chain owns 50 cafés in Vietnam and three more aboard.

The franchise fees of this chain depend on location. The monthly franchise fee is also calculated basing on the percentage of monthly profit of each shop, but the company website discloses no further information or actual figures.

E-coffee is owned by Trung Nguyen Group and has approximately 100 shops across the country and expects to expand its network to 3,000 units to become the largest café chain in Vietnam.

In order to realise this ambition, Trung Nguyen has issued an incentive package that charges no initial franchising fee for coffee shops of 4-40 square metres, and costs between VND65 million ($2,828) and VND175 million ($7,608) to set up (interior decor, furniture, training, and so on). Notably, the VND65 million ($2,826) package is offered for already existing cafés which want to assume Trung Nguyen’s E-coffee brand or beverage shops which want to add Trung Nguyen’s coffee products to their menu. The VND120 million ($5,217) package is offered for people who want start a café from scratch. And with the Prosperity Packagecosting VND175 million ($7,608), Trung Nguyen will help partners build complete E-cafés.

The first Milano café was opened in Ho Chi Minh City in late 2011 and the chain grew to 1,045 units in 2017as reported by Euromonitor. This café chain is popular for its affordable prices and great ambience.

The initial expenditure for a Milano café is VND90 million ($3,913), including the franchise fee, setup, land rental, hiring, and materials.

Viva Star started business in 2013 and is present in Vietnam’s larger cities and provinces. It is positioned at the mid-end segment with franchising and setup fees averaging at VND800 million ($34,782).

The franchise fee is VND160 million ($6,956) for a five-year contract, while the monthly fee is 5 per cent of the profit.

With more than 2,000 cafés in Vietnam and overseas, Napoli Coffee focuses on clean coffee products (coffee without chemical food preservatives) and it offers support (design, materials supply, training) to partners to open a shop with the initial expenditure of VND500 million ($21,739) and the franchise fee of VND70 million ($3,043).

Café Effoc is the symbol of take-away coffee, with target customers in the mid-end segment, especially office workers. It is considered a heavyweight in the café chain market.